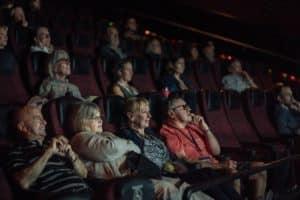 named in 2019 as one of MovieMaker Magazine’s Coolest Festivals in the World and one of only 27 Academy-qualifying film festivals in the United States. Festival award-winners in the Indigenous Short, Narrative Short, and Animated Short programs are eligible for Oscar nominations. With more than 6,000 attendees, the festival showcases more than 130 professional independent and student films and hosts a variety of public educational panels and post-screening talks with visiting filmmakers and award jurors.

BendFilm also works to counter the gender imbalance in the film industry by celebrating women filmmakers and honoring an IndieWoman of the Year to encourage aspiring and emerging women filmmakers to take up the craft–awarding a $10,000 cash grant to a BIPOC woman filmmaker.

As a way to curate independent and cult-classic films throughout the year, BendFilm owns and operates the Tin Pan Theater. Acquired in 2019, this boutique arthouse cinema enables BendFilm to expand on its mission and offer daily educational, independent, and genre-based film screenings and private events.

● Filmmaking Instruction Programs throughout the year, during the Festival, and in the summer that instruct filmmaking techniques using iPads to serve students who have been
underrepresented.
● Free Summer Films in the Park for underserved segments of the community (serving
approximately 1,000 community members).
● Topical Community Film Screenings in partnership with organizations like the Environmental
Center, World Muse, Out Central Oregon, ScaleHouse, and the Father’s Group.

As you’ve read this far, you are probably of like mind. We are thrilled by the outpouring of positive comments we receive. Thank you for your interest and whatever support you provide to independent film. To learn more about ways to support our mission, click here.