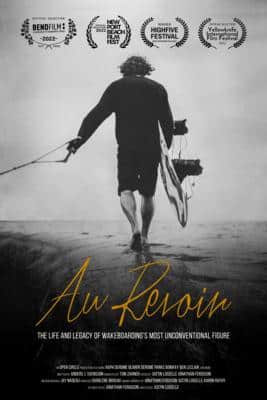 From a diffident youth to living legend, this is the story of wakeboarding champion Raph Derome as he retires from riding in front of crowds and cameras. Learn about Raph’s competitive family legacy, hear about the brotherly rivalry that fuelled his rise, and witness his last act on the water, the ride of a lifetime.Directors' Bio:Based in Montreal, Canada, Justin (Left) has eight years of experience as a freelance director and editor. From TV shows, documentaries, web series, and branded content videos. His latest directing work on the documentary Every Mystery I’ve Lived was a finalist at the 2019 Banff Film Festival. Jonathan (Right), co-directed the film."I love rogue characters who don’t fit the mold and succeed anyway, and spectacularly! I also appreciated the family story that fuels this fascinating tale. I don’t even like water sports but I found this thrilling. Raph's creativity and determination to stay true to himself is an inspiration." – BendFilm TeamFilm sponsored by Caliber Home Loans

Raw talent, creativity, and unadulterated childhood find a home on four wheels, and manage to break down generations of caste and gender barriers in the process.&nbsp;Director's Bio:Danny Schmidt has produced, directed, and photographed documentary films for clients including PBS, National Geographic, Netflix, Amazon Prime, NASA, the National Science Foundation, and many others. He received his MFA in Documentary Filmmaking in 2012 from Montana State University. His films have played at Telluride Mountainfilm, Wild &amp; Scenic, Boulder International Film Festival, Big Sky Documentary Film Festival, Banff Mountain Film, and many others.