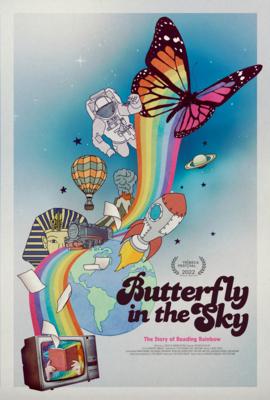 BUTTERFLY IN THE SKY (Open Caption)

This is the story of the beloved PBS children’s series “Reading Rainbow,” its iconic host LeVar Burton, and the challenges its creators faced in cultivating a love of reading through television. Not only did the series insist on having kids speak to kids about their favorite stories, Reading Rainbow introduced the world to one of the most adored television hosts of all time. Thanks to his direct, non-patronizing and, most importantly, kind delivery, Burton became a conduit to learning for children of every background, delving behind the pages to the people, places, and things each new story explored.&nbsp;Directors' Bio:Bradford Thomason and Brett Whitcomb are a filmmaking team with a catalog that oscillates between archive-rich nostalgic portraits of pop culture, compelling stories of female empowerment, and observational snapshots of under-explored cultures. Their acclaimed film Glow: The Story of the Gorgeous Ladies of Wrestling premiered at Hot Docs in 2012. Bradford and Brett recently co-directed the short film Lost Weekend and the feature length documentary Jasper Mall."What an inspiration to see how special Reading Rainbow was for both children and the people who poured their hearts and souls into it. Showcases the importance of children's education, diversity and representation on television, and ultimately what an impact good people can make in children’s lives." – BendFilm TeamFilm sponsored by InFocus Eye Care