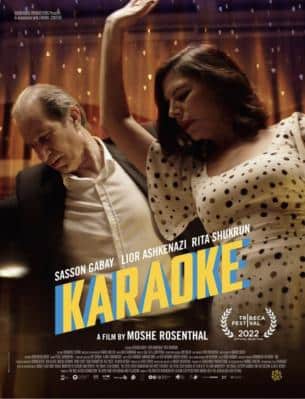 A bittersweet comedy about a middle-class suburban couple in their 60s who are drawn to their new neighbor, a charismatic bachelor who has karaoke evenings at his apartment.Director's Bio:Moshe Rosenthal is an Israeli filmmaker who graduated from The Steve Tisch School of Film and Television at Tel Aviv University. He writes and directs films, commercials, television and web. His short film Shabaton (2016) won Best Director Award at Jerusalem Film Festival and Best Short at Zlin Film Festival. His short film Our Way Back (2018) was nominated for the Israeli Academy Awards, and was theatrically released in Israel. Karaoke won the Steve Tisch grant for first features, as well as the second prize in the Jerusalem Film Festival Pitch-point event."A compassionate and tender story about our need to transcend who we are, no matter what age. Kudos to this filmmaker for being so astute about human nature. Brilliant casting and performances above all." –BendFilm Team&nbsp;