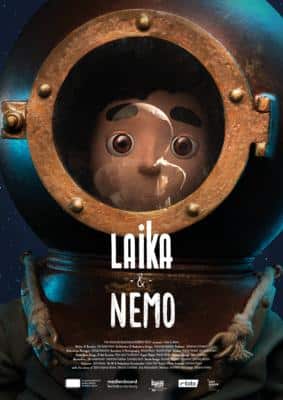 Nemo looks different. No one else wears a diving suit and a helmet that big. But then he meets Laika, an astronaut. With her help, Nemo becomes more self-confident and learns how old wounds can be overcome with the help of new friendships.Directors' Bio:Jan Gadermann (Left) has written and directed two short films and is co-creator of the board book series „Mats &amp; Frida“. Sebastian Gadow (Right) was awarded a full scholarship from the “Studienstiftung des deutschen Volkes". With “Laika &amp; Nemo” they both graduated from Film University Babelsberg KONRAD WOLF with a master’s degree in Directing Animation.

A young boy and his dog in the rice fields of Cambodia encounter an unmoving obstacle that will bring their love to light in this endearing story between best friends.Director's Bio:Shad Bradbury has worked in animation for over 20 years. He has worked as an animator at studios like Pixar, Sony, Tippet, and Rhythm and Hues. Some of the better known credits include, "Lightyear", "Coco", "Finding Dory", "Inside Out", "Hotel Transylvania", and "Cloudy with a chance of Meatballs 2". Run Totti Run is his directorial debut.

A fluffy white cat wants nothing more than to find the most comfortable spot in the universe, but little does she know a fuzzy winged intruder, Monty, has his eye on it, too.&nbsp;Director's Bio:India Barnardo grew up in a small countryside town with her two cats. She has always had a passion for writing and directing and with that brings us Cat and Moth as her directorial debut. With India’s past experience in the animation industry it has given her the knowledge and skills to build an extraordinary 90+ crew from around the world to bring Cat and Moth to life!

Two brothers living in an apartment in Korea in the ’90s are disrupted every morning at dawn by a stranger’s yelling. After hearing a rumor that he’s a cannibal, they start their own investigation to find the man’s motives.Director's Bio:Sang Joon Kim is a South Korea born, New York based visual effect artist/filmmaker. He worked at major visual effect studios like Framestore and was experienced in commercial films as a visual effect artist. From his work experience, as a technical director, he aspires to make stories from his own ideas. He just finished third short animated film, Echo, which is based on his own childhood memories.

Everything changes for Cosmo, a chameleon who can’t seem to find his place in the jungle, when he meets another reptile like him.Director's Bio:Alex Ross is a Los Angeles-based filmmaker who grew up on a rich heritage of film, television and storytelling. Regardless of the medium, he enjoys telling stories that cut to the core of the human experience. While he produces for a living, "The Social Chameleon" is his first film &amp; directorial debut.