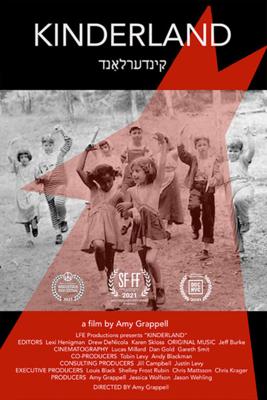 Kinderland tells the story of two secular Jewish summer camps that have cultivated social activists for almost a century and are still in existence today. Both camps were founded by secular working-class Jews on either side of the leftist political divide. Kinderland was communist; Kinder Ring, socialist. Despite numerous commonalities, they enjoyed a legendary feud from opposite ends of Sylvan Lake. In response to the devastating impact of the Trump era and the rise of intolerance and inequality, today’s campers prioritize shared values over philosophical differences and attempt to join forces in the ongoing fight for equality and justice.Director's Bio:Amy Grappell's documentary "Quadrangle" premiered at Sundance (2010), winning a Jury Prize, and went on to win Best Short Film at SXSW and AFI Film Festivals before being broadcast on HBO. She returned to Sundance (2011) with her documentary, "Kids Green The World," and was one of the select directors of Richard Linklater's SLACKER 2011. Her feature documentary "Light From The East" was broadcast on PBS and is part of the Library of Congress collection.