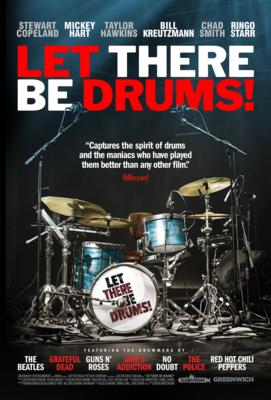 LET THERE BE DRUMS!

After the Grateful Dead’s final 50th anniversary shows in 2015, filmmaker Justin Kreutzmann (son of the Dead’s drummer, Bill Kreutzmann) realized that, for the first time, he and his dad could forge a relationship outside the shadow of the band. In the hopes of better understanding both his father and the instrument that has defined his life, Justin interviews the world’s greatest drummers, and along the way examines the personal struggles that so many of these musicians and their families have faced, the nature of how music passes from generation to generation, and the essential role that drumming plays in human life.Director's Bio:Justin Kreutzmann was born to the world of art, music, and the highly creative if unconventional world of Rock ‘n’ Roll. He was executive producer on the feature film, The Other One: The Long Strange Trip of Bob Weir and is a producer, along with Martin Scorsese, on the Grateful Dead documentary, Long Strange Trip. His film, Break On Thru: A Celebration Of Ray Manzarek And The Doors won Best Feature Film at the Asbury Park Music And Film Festival in 2018."Legendary drummers and what it's like to grow up with them—what's not to like!" – BendFilm TeamFilm sponsored by Cascade School of Music