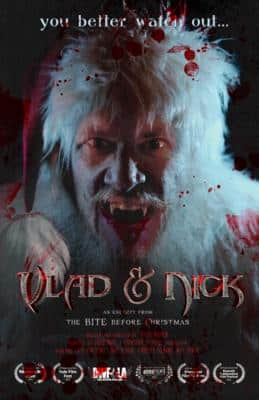 On Christmas eve, an aging vampire recounts his adventures with an old friend.Director's Bio:Taylor Morden is an indie film maker from Eugene Oregon. Best known for the documentary The Last Blockbuster.

After a bank robbery gone bad, a broken criminal and his unhinged partner hide out in a shack in the orange groves of Bakersfield to await their getaway car. As they try to get out of this clusterfuck with some of their dreams intact, their personal demons may have other plans.Director's Bio:Derek Sitter is an award-winning actor, writer, director of film and theatre. He holds an MFA in Acting from LSU and a life membership to The Actor's Studio. Derek has been working professionally in theatre, film, and TV for over 30 years. He owns Volcanic Theatre Pub in Bend, Oregon and Born Into This Films where he is focuses on writing, acting, and directing. Derek's last film, Tutu Grande, had a very successful run in the film festival circuit winning awards in most categories.&nbsp;

Two best friends in Edwardian-era England, Bernadette and Nicholas, conspire to regain Bernadette's inheritance from the hands of her scheming sister Mildred.Director's Bio:This film was written by 15 year old Harper Rich and produced as a short film with instructor director Taylor Moe for our Teen Theatre Film Production Class. Harper was involved in all aspects of the production and she and her friends and family crewed on the set. She won CTC's Teen Writing Competition with the script that she wrote in Cricket Daniel's class at Cascades Theatrical Company.&nbsp;

In Get Stung, Dutch Guy helps a malcontented worker bee–called simply, Honey Bee– return to its hive and cope with its impending death. We follow the unlikely duo as they break barriers, share secrets and dance through suburbia to learn how to accept the finality of death.Director's Bio:Nick Logsdon is a writer, director and producer residing in Bend, OR. He's written and produced work for MAD Magazine, New Balance, Samsung, Oakley, Apple TV &amp; Apple TV+. He's currently working as a writer and creative for ROSEWOOD Creative. His previous work has been featured in Vulture Magazine, Austin Film Festival and the London Worldwide Comedy Festival.&nbsp;

Gyeonggi-do, South Korea, 1970 — A young orphan faces a test of loyalty and friendship when she is accused of a crime that she did not commit. She is confronted with two choices – betray a friend to prove her innocence, or suffer the punishment herself. Based on a true story.Director's Bio:Emma Duvall is a Korean-American actress and filmmaker who has a passion for amplifying underrepresented voices. At the end of 2020, Emma was awarded the “Tell Your Story” grant from Oregon Made Creative Foundation for BIPOC filmmakers. She later received BendFilm’s “Underrepresented Voices” grant which supported the completion of her film. For her directorial debut, she tells a story from her mother’s childhood growing up in an abusive South Korean orphanage.&nbsp;

A young couple sets out on an off-grid camping trip in Vernonia, Oregon. Sarah, grieving the recent death of her mother, is awed by the beauty of the woods and is inspired by the idea of living off the land. Meanwhile, Aaron is not impressed by Sarah’s new interests; he grew up nearby and long ago grew out of any kind of interest in rustic living. But as they settle in, they soon discover that their camp is being sabotaged by someone who doesn’t want them there. As they try to figure out what’s happening, the cracks in their relationship begin to show, and Sarah finds her own voice growing stronger and stronger.Director's Bio:Eric is a Director from Bend, Oregon. His interest in film started early, shooting skate and snowboard videos with friends. This led to a video production career with a dream to work in film. Leaving Bend for Albuquerque, NM, Eric worked in film experiencing Hollywood firsthand. He returned to Oregon and started a production company, working with clients such as Microsoft, and Anheuser Busch. Eric enjoys being outside and time with his wife Lindsay and their two daughters Luca and Rosie.