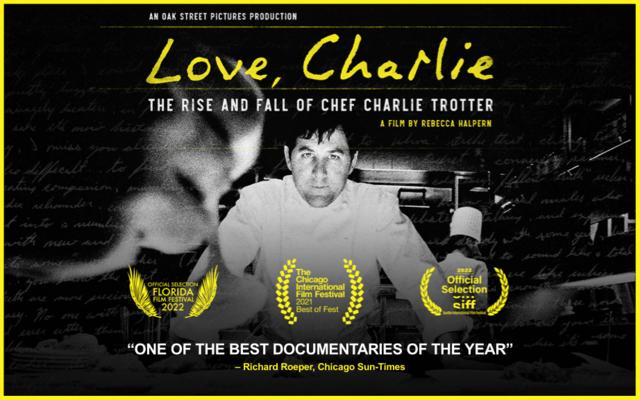 LOVE, CHARLIE: THE RISE AND FALL OF CHEF CHARLIE TROTTER

In the 2000s, chef Charlie Trotter was the toast of Chicago, his eponymous restaurant one of the world’s top fine-dining destinations. A gastronomic revolutionary and a culinary bad-boy, Trotter paved the way for the likes of Anthony Bourdain and Gordon Ramsay, yet his tempestuous, competitive nature alienated many. With never-before-seen archival material and new interviews with those who loved and loathed Trotter—who died from a stroke in 2013 at age 54—this absorbing, unvarnished profile chronicles the passions of a master chef and the consequences of pursuing perfection at all costs.Director's Bio:From true crime docuseries to feature documentaries rooted in history and the arts and culture, Rebecca’s work evokes emotion, and enlightens and empowers audiences. Most recently, Rebecca served as Co-Executive Producer of Netflix’s “How to Become a Mob Boss”; and she is making her directorial debut with “Love, Charlie”, a feature documentary that was named Best of the Fest at the 2021 Chicago International Film Festival. In 2021, she also produced and wrote a feature documentary about tennis great Stan Smith with the SpringHill Company. Prior to that, she served as the Co-Executive Producer of “Helter Skelter: An American Myth”, a six-part documentary series about Charles Manson for Epix network from Executive Producer Greg Berlanti and Director Lesley Chilcott."As hard as it is to see genius getting buried under its own weight, Charlie Trotter's multifaceted and uncompromising artistry in the kitchen and in business is an inspiration." – BendFilm TeamThis film is sponsored by Tompkins Wealth Management