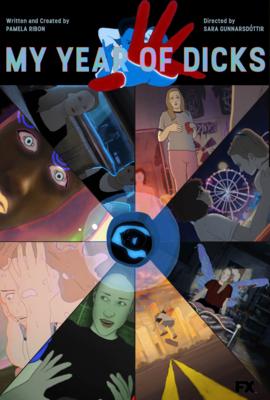 MY YEAR OF DICKS

My Year of Dicks is a hilarious and provocative work of animation thirty years in the making. Icelandic director Sara Gunnarsdóttir is known for her honest, emotional artwork, and creator/writer Pamela Ribon has been telling unusual stories with unusual heroes for a long time. This is an adaptation of her mortifying memoir, which NPR called “brain-breakingly funny.” This teenage heart-stomp manages to put you right back into some of young love’s most relatable, uncomfortable moments with humanity, humor, and heart.Director's Bio:Sara Gunnarsdóttir is a director and artist who has created animation, music videos, and original artwork for film and television, including Marielle Heller’s “The Diary of a Teenage Girl,” and HBO’s Emmy-nominated “The Case Against Adnan Sayed.” Born and raised in Reykjavik, Iceland, Sara received her BFA from the Icelandic Academy of the Arts. Her short, “The Pirate of Love,” was nominated for “Best Alternative” in The Academy’s Student Academy Awards.