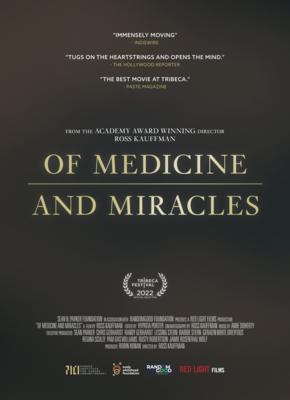 OF MEDICINE AND MIRACLES

At the age of six, Emily Whitehead was diagnosed with leukemia, and the lives of her and her parents were suddenly thrust into uncertainty. Through bracingly honest interviews and home videos, Emily and her family bounce from hospital to hospital, trying to stay hopeful amidst hopelessness, and their fateful correspondence with a doctor whose research could hold the key to her survival. But time is of the essence.&nbsp;&nbsp;Director's Bio:Ross Kauffman is the Academy Award®-winning filmmaker of the documentary Born Into Brothels. The film was shown in over sixty film festivals worldwide and received a multitude of awards, including the 2005 Emmy Award for Best Documentary, National Board of Review Best Documentary 2004, LA Film Critics Best Documentary 2004, and more. Of Medicine and Miracles premiered at the Tribeca Film Festival in 2022.&nbsp;"A tense and emotional rollercoaster ride touching on both the miracles of medical research and the real-life story of a family. It's uplifting to be reminded of the good dedicated people, whether they're researchers, doctors or parents. A powerful story of hope and possibility amid all the darkness–exactly what we need!"– BendFilm TeamFilm is sponsored by Dr Andy Higgins