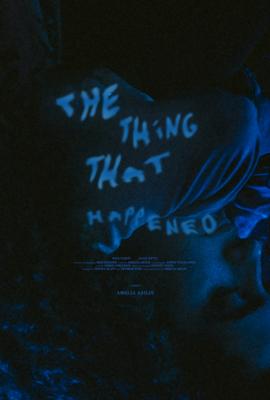 Something horrible happened to Amar when she was eight. Her mom left her alone with her pediatrician and she was never the same. Years later, Amar sets off into her memories, guided by her therapist, Emily. Unable to relive the trauma, Amar creates surreal altered versions of the event as the only way she can finally face the thing that happened.Director's Bio:Amelia Asilis is a queer Latina cinematographer based in Los Angeles, California, originally from Miami, Florida. She's the daughter of Dominican immigrants who have wholeheartedly supported her career in the film industry.

In the isolated mountains of central Corsica, Petru raises his two twins alone: ​​Jean and Matthias. Every Sunday in winter, they go boar hunting. As they approach adulthood, their bond has given way to a relationship of confrontation and competition. Jean, who lives in the shadow of his brother, is jealous of the privileged relationship that Matthias seems to have with their father. Which feeds his one desire: to finally be recognized for equally, even if it means he will have to sacrifice part of himself to get it.Director's Bio:Julien Meynet was born in 1982 in Lyon (France). After studying editing at INSAS in Brussels, he returned to live in Corsica and shot his first short film “La Terre Brûlée” (The Burning Land), a period film without dialogue selected in many festivals around the world. While he’s shooting his second short film “Le Puissant Royaume” (The Mighty Kingdom) in 2022, he is starting to write his first fiction feature film “Pendant que les champs brûlent” (While the fields are burning).

How to maintain well balanced life, how not to fall, when everything around is falling? How to progress when all solutions seem to be wrong? Which part should I play in the finest arts of all such as the art of life? Some of out everyday decisions may seem meaningless, whilst others affect us for years, occasionally putting our world upside down. This short story is about the man who actually faces the most peculiar moment of art of balance, art of choice, art of life. C'est la vie!Directors' Bio:Kapok is a group of friends, who are involved in amateurly creating animated films in the traditional stop-motion technique. The core of the group are Jacek Olejnik, Rafał Sankiewicz, Wojciech Sankiewicz and Bartosz Terlicki, who decided to combine their diverse skills from different fields of artistic activity in 2009. Their first movie entitled "Pipeta" was released a year later. The next decade is the time of prolonged hard work on their latest short film “C'est la vie”.

I want to touch it. Should we touch it? Yes! NO. Nononono. YESSSSSSSS…Director's Bio:Michael Langan's work has been called "confounding and fascinating" by The New York Times, "inventive" by The Atlantic, and "eerily beautiful" by NPR. His films and music videos have played at over a hundred film festivals worldwide, including Bend in 2007 ("Doxology") and 2013 ("Butler, Woman, Man"). He lives in a blue house in Seattle.

A story about searching for intimacy in all the wrong places, "Rendezvous" explores what happens when innocence is lost and childhood ends—all within the span of a single afternoon.Director's Bio:Benjamin Howard is an Emmy-recognized writer, director and producer. As a gay storyteller, Benjamin’s narrative projects often explore themes related to sexual identity, particularly through a 'coming-of-age' lens. His undergraduate thesis project "Deviant" played at Outfest and HollyShorts in 2018 and was recognized with a Student Emmy Award in 2019. Benjamin will receive his M.F.A. in Film Production / Directing at UCLA, and is currently editing his debut feature "Riley".

On the day of her mother’s wedding, 15-year-old Delia attempts to find clarity on a strange moment that happened the night before with her soon-to-be stepfather. As the wedding setup swirls around Delia in her home, she tries to find someone to talk to who will help her form an opinion on something she herself is unsure even happened. With each interaction, she finds herself falling deeper into confusion—about what happened, and what adults assume about her. In the end, Delia learns that being a newly sexual and sexualized human being is anything but a cakewalk.Director's Bio:Emma Hall-Martin is an Oregon-bred, Brooklyn-based filmmaker and weekend waitress currently pursuing her MFA in Screenwriting and Directing from Columbia University. Before graduate school, she spent time as a costume coordinator and various other positions in the costumes and art departments in film and TV. Emma loves to tell stories centered around nuanced female experiences, especially through the vehicle of teenage characters.

After missing his wife's phone call goodbye on the morning of September 11th, a now listless and brokenhearted music teacher must harmonize with his increasingly desperate fourteen-year-old son.Director's Bio:Originally from New York, Daniel left home at seventeen to join the United States Marine Corps Infantry. He served four deployments including both the Iraq and Afghanistan wars where he was wounded in combat. Utilizing the character driven drama, Daniel’s work explores how trauma complicates but beautifies the human experience—through themes of inadequacy, rage, and rebirth. Daniel earned an MFA in directing from the American Film Institute Conservatory.