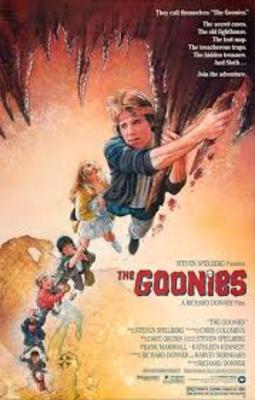 The Goonies | in the Alley on VHS

It’s been 35 years since The Goonies audiences first went in search of treasure with a lovable band of kids from Astoria into the caves beneath the northern Oregon coastline and Ecola State Park. To celebrate the 35th anniversary of the film, Oregon Film and Travel Oregon will offer public screenings of the movie in five cities around the state—from Salem Cinema to BendFilm, Baker City, La Grande and Coos Bay.The Goonies is an old-fashioned yarn about a band of adventurous kids who take on the might of a property developing company which plans to destroy their home to build a country club. When the children discover an old pirate map in the attic, they follow it into an underground cavern in search of lost treasure but come up against plenty of dangerous obstacles along the way.