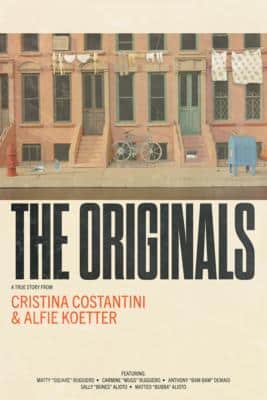 Ten years after falling in love with their Brooklyn landlord, Matty “Square” Ruggieroand, Cristina and Alfie get back in touch with Matty to hear stories of what it was like to grow up in South Brooklyn, where money was tight but friendships were tighter.&nbsp;Director's Bio:Cristina Costantini is a filmmaker, who most recently directed the Netflix feature documentary Mucho Mucho Amor about famed astrologer Walter Mercado, which premiered at Sundance in 2020. Her first feature documentary, Sceince Fair, won the first Sundance Festival Favorite Award in 2018, as well as an Emmy and a Critics’ Choice Award for Best First Time Director. Alfie Koetter is a designer and first time director.&nbsp;

Protests in the streets. Environmental crises. A madman in the White House. Welcome to 1970. In a quiet pocket of Oregon, a utopian community of hippies, midwives and self-taught builders reflect on being one of the last idyllic and uncompromised places in America.Directors' Bio:Philip Lauri, director, has an insatiable curiosity and an unshakeable ethic to always find (and tell) the truth.Steven Oliver, director, is a steady rudder with writer’s chops and a hunger to go, go, go.Together, they are lifelong friends from Owosso, Michigan. And for the last twelve years, they have been making documentary films and shooting commercial work as Three Words, a production company out of Chicago and Detroit.

Victor and Nacho, lifetime friends and mafiosos, have been chained together and abandoned in a deserted area with no clear way to escape, but a confession from Nacho will change their lives forever.Director's Bio:Oriol Villar has shot many highly successful commercials for clients such as Pikolin, Casa Tarradellas or Damm. Concrete and Steel is his first fiction experience.&nbsp;

A rural rancher and his ailing husband, struggling against poverty and isolation, are forced to make a heartbreaking decision in order to preserve the dignity of their marriage in the face of mounting pressures from relatives.&nbsp;Director's Bio:P.J. Palmer is an award-winning filmmaker. He was raised in the rural mountains of Northern California and now lives in New York City and Los Angeles. P.J. worked as series producer for the LGBTQ+ drama series, Anyone But Me, now on Amazon Prime. He has written an award-winning pilot script titled On Cannery Row. And he has recently completed his feature script, Son of a Preacher Man. P.J. wrote and directed the film North Star, starring Colman Domingo with a cameo from Kevin Bacon.