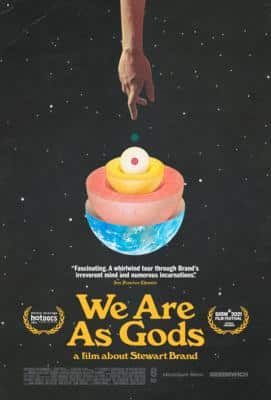 WE ARE AS GODS

Stewart Brand, creator of The Whole Earth Catalog and an influential member of Ken Kesey’s Merry Pranksters, was a founder of the modern environmental movement, and, today, a vocal advocate for bringing back extinct species of animals and plants. Now in his 80s, he looks to leave a legacy for the future. Under fire from former allies who believe he’s gone too far, Brand won’t be easily deterred from a mission he feels is necessary to save the future of the planet.Director's Bio:Jason Sussberg is a San Francisco-based filmmaker focusing on art and humanity in the sciences. He started his career working in sports TV. After receiving his MFA at Stanford University, he and filmmaking partner David Alvarado founded Structure Films. David Alvarado is a director/cinematographer focusing exclusively on science, health, technology and nature. Together, they directed The Immortalists, Bill Nye: Science Guy, and We Are as Gods."The ultimate conversation starter of a film! Every rogue individual swims against a tide of ordinary thinkers and it takes a while for their ideas to be accepted. Thank God they exist! It's hard not to embrace Stewart Brand's radical solution to our most persistent problem." –BendFilm TeamFilm sponsored by Bend Anesthesiology Group