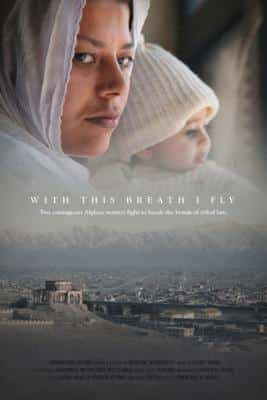 WITH THIS BREATH I FLY w/ The Red Suitcase

At the height of the international occupation of Afghanistan, Gulnaz and Farida are imprisoned on charges of “moral crimes” by an Afghan justice system that is supported by billions of dollars of aid money from the European Union. These two courageous women fight for their freedom against a patriarchal Afghan society, while exposing the complicity of the European Union in censoring their voices, and how the international press (including this documentary) forever alters the course of their lives.Directors' Bio:Clementine Malpas (Left) is a documentary filmmaker with over nine years experience in the developing world. She has made films for Channel Four, NBC, PBS, Current TV, the United Nations, and the Aga Khan Foundation. In addition to his documentary work, Sam French (Right) wrote and directed the Academy Award nominated narrative short film Buzkashi Boys, which was the first narrative film since 2001 to be filmed entirely on location in Afghanistan.&nbsp;"An unvarnished and increasingly haunting portrayal of inequality perpetuated by men, women and the governing systems of not only the east but the west as well. The nuances of the story are very well-captured, and sometimes everything is expressed loud and clear in the subjects' faces as well as their words." – BendFilm Team

A veiled 16 year old Iranian teenager is terrified to take her red suitcase from the carosel at the Luxembourg Airport, and go through the exit doors. Her fear grows with every second in the face of what awaits her beyond the gate.Director's Bio:Cyrus Neshvad is an Iranian film director based in Luxembourg. His previous short films Son and Portraitist both won the Luxembourgish Oscars in 2018 and 2021.