Since 2016, Caldera has collaborated with BendFilm to support a filmmaker-in-residence. This artist spends three and a half weeks at the Caldera Arts Center near Sisters developing their next project. During the residency, the filmmaker will present their work at Caldera’s Open Studios and at a BendFilm-sponsored special engagement.

The 2018 winning applicant is Alisa Yang who will be in residence from March 1-25. Keep an eye out for announcements about Open Studios and Alisa’s BendFilm screening in Bend.

More about the program:
Caldera’s Artist in Residence programmers the gift of time and space on the eastern slopes of Oregon’s Cascade Range. Month-long stays o er private accommodations, 24-hour access to studios and a weekly meal.

By design, residents form a small community of seven to 12 artists, depending on the group. Community outreach and collaborations
are encouraged.

Caldera is a catalyst for the transfor- mation of underserved youth through innovative, year-round art and environ- mental programs.

Check back in spring 2019 for the 2020 application deadline. 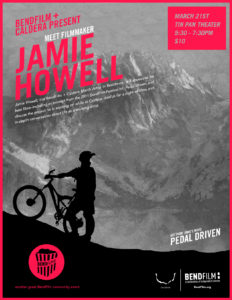 Jamie Howell, the BendFilm + Caldera March Artist in Residence, will showcase his best films–including an excerpt from the 2011 BendFilm Festival hit, Pedal Driven, and discuss the project he is working on while at Caldera. Join us for a night of films and in-depth conversation about life as a working artist. 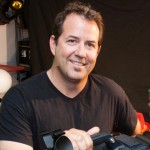 Pacific Northwest writer, filmmaker, and musician, Jamie Howell, currently serves as both Artistic Director for Film and Development Director for the Icicle Creek Center for the Arts in Leavenworth, WA. As Artistic Director for Film, he curates a documentary film series and has been responsible for building a new film education program that includes a Young Filmmakers Camp and year-round filmmaking workshops. Jamie started his career as a journalist and editor before moving into documentary film production and founding Howell at the Moon Productions in Wenatchee, WA. His documentary productions have centered largely on issues of sustainability through works such as “Broken Limbs: Apples, Agriculture and the New American Farmer” and “Pedal-Driven: a bikeumentary.” He has garnered two Northwest Emmy nominations and a host of film festival awards, along with an award-winning body of television and online commercial productions. In addition, he played guitar, sang, and wrote with the musical group Fathappy for 12 years. He is currently at work on two novels and lives in Wenatchee with his wife, Nena.

Each year, Caldera, BendFilm and The Museum at Warm Springs select a Filmmaker in Residence for the month of March. Every winter January through March, creative individuals and collaborative groups are awarded the gift of time and space at Caldera Arts’ beautiful Arts Center in the foothills of the Cascade Mountains near Sisters, Oregon, for monthlong residencies.

The selected filmmaker works 2 – 3 hour sessions for four days during spring break week in March to teach filmmaking to Caldera high school students and create with students a film of interviews and work in progress of artists from The Confederated Tribes of Warm Springs; presents work at Caldera’s Open Studios; and takes part at a “Meet the Filmmaker” program presented by BendFilm in Bend, Oregon.

Successful candidates will be Native American filmmakers or filmmakers who have worked with Native American populations in the past, have quality work samples, a CV that points to their potential and, most importantly, experience teaching film to high school students.

at Elizabeth.Quinn@CalderaArts.org or to apply go to: