Stay tuned for THE 2023 fundraiser dates and information!

Thank you to everyone who attended and contributed to our 2022 fundraiser! We threw it back to the 70’s with a program that transported us from our mind’s TV screen archives into a LIVE variety, game, late-night talk, video, music and dance show! The first-ever ‘That BendFilm Show’ featuring the future of film filmmaker, Manhattan Wood, Deb Auchery and the Cult of Tuck, DJ Giancarlo, Katy Ipock, and so much more hosted by your favorite Tin Pan Programmer and Source Weekly critic, Jared Rasic, and Cult of Tuck star Foxy LaHound was a hit! 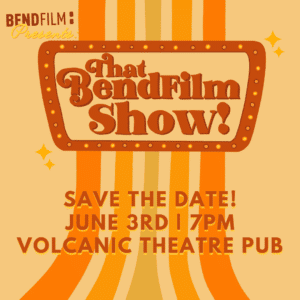 Thank you all who attended and contributed to the 5th Annual Power of Film Fundraiser, BendFilm hosted in partnership with Saving Grace!

The event includes the premiere of a BendFilm-produced short documentary about Saving Grace’s life-affirming work.

In 2020, we worked with Partners in Care to executive produce a short film about their compassionate and courageous organization. The film premiered on September 19th at the BendFilm Power of Film Fundraiser and showcased how their patient-centered care honors the dignity and needs of those it serves.  Their services enrich the lives of its patients, families and our whole community.

Thank you to everyone who attended and contributed to BendFilm at the event!

In 2019, BendFilm Festival executive produced “A Community of Hope”–a short documentary directed by Bradley Lanphear of Bradley Lanphear Photography about Health Beginnings‘s life-transforming programs. This film helped Healthy Beginnings win “Non-profit of the Year” through the Bend Chamber of Commerce. Healthy Beginnings’ Executive Director, Diane Murray Fleck said, “So I just want you to know that your work, the concept of the project, has a ripple effect in sharing our message in powerful ways. Thank you for all you have done for us this year. It really matters.”

A Community of Hope from BRADLEY LANPHEAR on Vimeo.

In 2018, BendFilm Festival executive produced “This is My Family”–a short documentary directed by Taylor Morden of Pop Motion Pictures about The Bend Spay & Neuter Project‘s life-transforming program exhibiting the unique power film has to unite the community and inspire action.  Check it out and let us know what you think!

The June 2nd event was an unqualified success wherein BendFilm hosted 180 amazing and generous people who contributed to help us further our mission celebrating the wonderful art form of independent film!

Check out the great photos from the event and tag yourself!

BendFilm kicked off this initiative in 2017 with the premiere of “This is My Home”–a powerful short documentary about Oregon Adaptive Sports‘ incredible programs. Check it out:

This is My Home from Oregon Adaptive Sports on Vimeo.