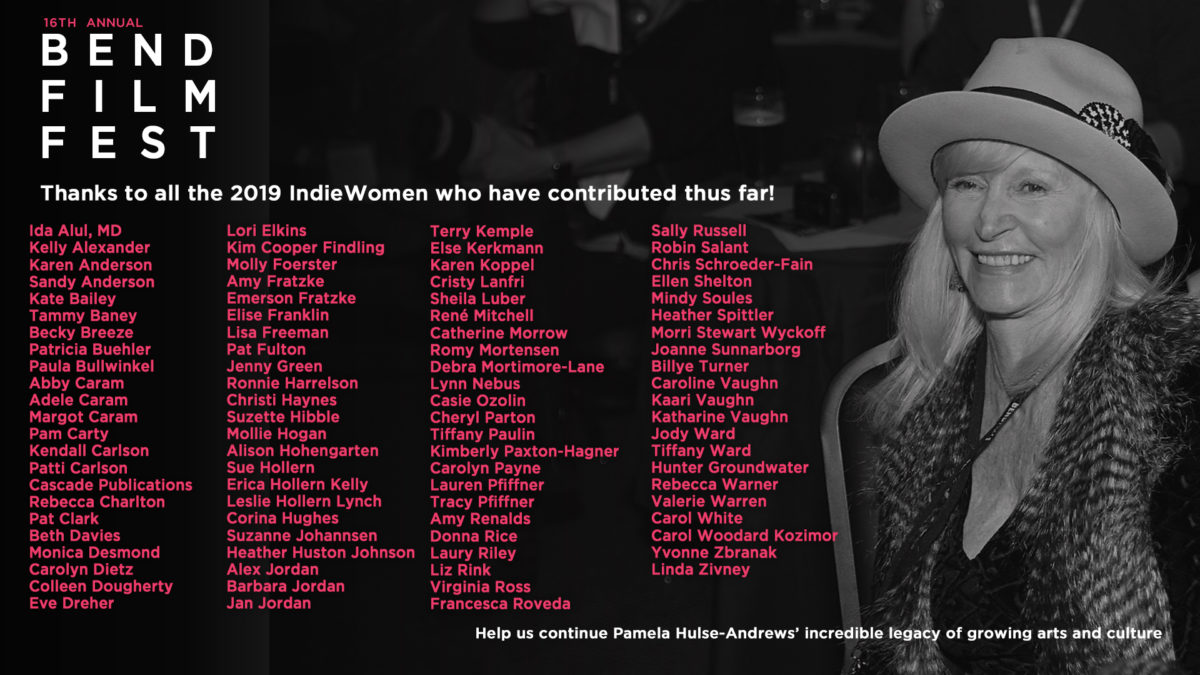 This article first appeared in Cascade Business News in the September 3, 2019. By: Tracy Pfiffner, Marketing and Development Manager, BendFilm

Pamela Hulse Andrews arrived in Bend in the mid-nineties with a passion for film and the determination to make a difference. She founded Cascade Business News in 1994 and launched a second publication, Cascade A&E in 1995. Our community was deeply saddened when Pamela passed away last year. Her love for the arts lives on today through the memories of her many friends and family and the legacies she created.  END_OF_DOCUMENT_TOKEN_TO_BE_REPLACED

The weather was perfect and festival-goers were abuzz with excitement for this year’s line up of 70 films, 30 musical acts, and more than 50 filmmakers in town for audience Q&As. Special guests at this year’s festival included our IndieWoman of the Year – Christine Vachon, Producer of Oscar-winning films: Carol, Boys Don’t Cry, First Reformed, and Hedwig and the Angry Inch.

This year’s First Features Honoree, Ron Shelton is an Oscar-Nominated Writer/Director known for what is considered to be one of the best sports movies of all time:  Bull Durham. Ron took the stage at the Awards Ceremony to talk about the importance of indie film festivals and insights from his award-winning career writing and direct films including Tin Cup, White Men Can’t Jump and Blaze to name just a few. Film critic and author Shawn Levy came to town to interview Ron on stage after the screening of Bull Durham at the beautifully restored Tower Theatre.

15 films and filmmakers were awarded jury prizes at the 2019 BendFilm Festival. These films fall into 12 categories, including the coveted Best of Show, which carries a $5,000 cash prize. More than 1,200 films were submitted to BendFilm from across the country and across the globe.

END_OF_DOCUMENT_TOKEN_TO_BE_REPLACED

AT THE VIDEO STORE 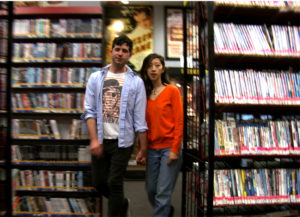 A loving ode to the dying art of connection and curation. Director James Westby weaves together the macro-narrative of the industry’s changing business model with the intimate memories of store owners and cinema icons like John Waters, Nicole Holofcener, Gus Van Sant, and Bill Hader. While nostalgic for what was lost, the film is hopeful about what neighborhood video stores can still offer a world starved for authentic human interaction.

About the filmmaker: James Westby is called “a wizard of concision and a master of discomfort” by The New York Times, James Westby is an independent filmmaker from Portland, OR. He writes, directs, and edits provocative films with economical budgets and no compromises. And big laughs! And discomfort.

Westby’s work in the commercial world includes the short film EVAN RACHEL WOULD for tomboy clothier Wildfang (starring Kim Gordon, Beth Ditto, and Evan Rachel Wood), as well as recent campaigns for Duraflame, The Oregon Lottery, and more cannabis companies than you can count.

At The Video Store Showtimes and Tickets

END_OF_DOCUMENT_TOKEN_TO_BE_REPLACED 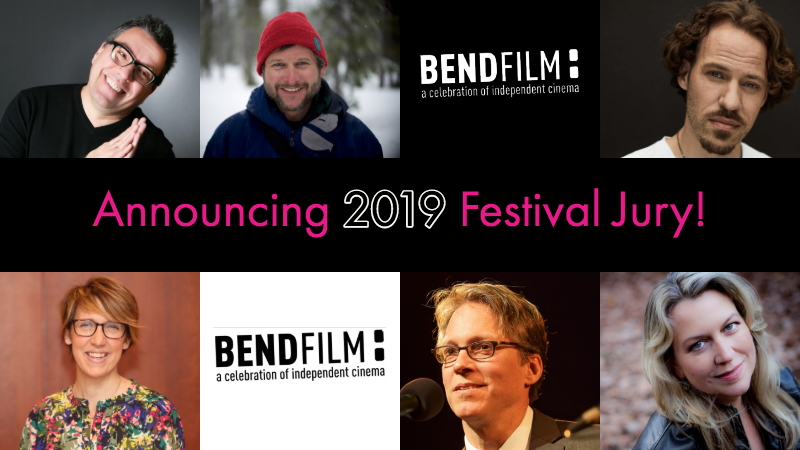 Filmmakers, Industry Executives, Actors, and Media Members To Give Out $10,500 in Prizes Throughout the 16th Annual BendFilm Festival

Bend, OR – BendFilm, Central Oregon’s premier and internationally celebrated Film Festival, has announced 15 artists, executives and cultural leaders who will award $10,500 in cash prizes –  including $5,000 cash for “Best of Show” to short and feature films during the 16th annual BendFilm Festival.

Jurors will announce the awards in a ceremony on Saturday, October 12. Select jurors will also help with Festival events including panels, guided discussions and the Future Filmmakers program for student storytellers.

BendFilm Festival Programmer, Erik Jambor, said, “We are grateful to the artists and cultural leaders who give their time to BendFilm and provide invaluable feedback to the independent filmmakers at the Festival. Part of what makes this experience special is the camaraderie formed between artists and industry leaders across different sectors during these four days and lasts well past the final screening.”

The 16th Annual BendFilm Festival will take place October 10-13 and tickets are on sale now.  In competition for this year’s cash prizes are 8 Narrative Features, 8 Documentary Features and 71 Shorts. END_OF_DOCUMENT_TOKEN_TO_BE_REPLACED 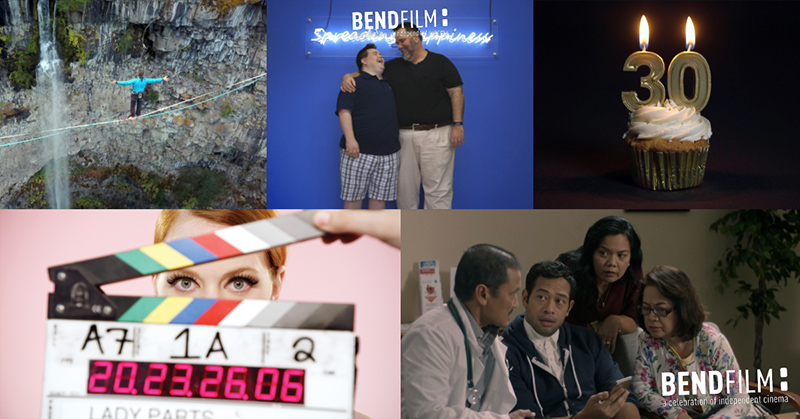 Program Features Local Artists, Alumni Storytellers And Popular Short Films From Around the World That Dare Audiences Not To Blink

Bend, OR – BendFilm announced today the 71 short films selected to screen at the 2019 BendFilm Festival running October 10 – 13, 2019 at iconic locations around Bend including the historic Tower Theatre, Tin Pan Theater, McMenamins – Old St. Francis, and the Regal at the Old Mill District. The screening times for the official selections are live on the BendFilm website and tickets are available now. The 2019 BendFilm Festival will also present 45 feature films and award over $10,500 in prizes directly to independent filmmakers.

The Short Films screening in the 2019 BendFilm Festival are: END_OF_DOCUMENT_TOKEN_TO_BE_REPLACED 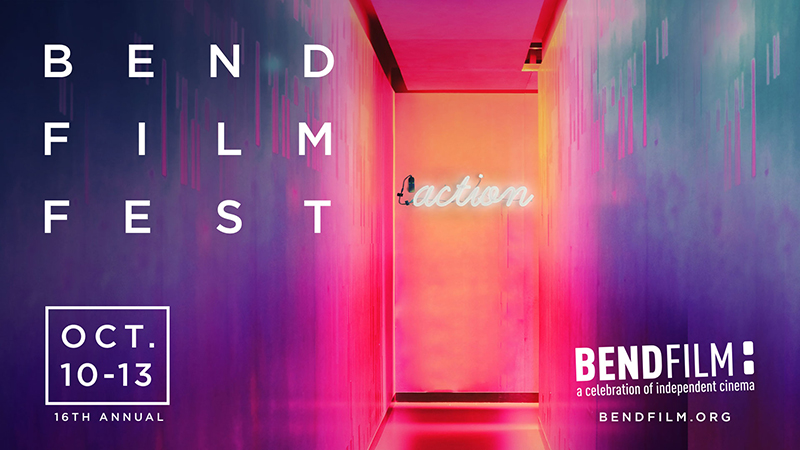 BendFilm announced today the feature films selected to screen in competition at the 2019 BendFilm Festival running October 10 – 13, 2019 at iconic locations around Bend including the historic Tower Theatre, Tin Pan Theater, McMenamins – Old St. Francis, and the Regal at the Old Mill District. The 2019 BendFilm Festival will present 45 feature films and award over $10,500 in prizes directly to independent filmmakers.

BendFilm was recently designated one of the “Top 25 Coolest Film Festivals In The World” by leading film trade MovieMaker Magazine. The festival takes place in the scenic town of Bend, Oregon which is regularly included in the Best Towns roundup for Outside Magazine. END_OF_DOCUMENT_TOKEN_TO_BE_REPLACED

Our Founding Sponsor, Brooks Resources is celebrating their 50th Anniversary. Not only has Brooks Resources physically developed the town, but they have also helped to shape our culture and took a leading role in founding BendFilm in 2003.

With roots in the booming timber history of the last century, Brooks Resources knows that sometimes, things are worth waiting for. Although it doesn’t take quite as long as a Ponderosa Pine to grow to maturity, building a true community isn’t quick or easy. But when done right, something magical happens. And everyone wants to be a part of it.

Fifty years is really significant when compared to the rings of a mature tree. However, since its inception in 1969, Brooks Resources has been a steady, guiding force in our community. While their primary business is real estate development, Brooks Resources and its visionary leaders have played an instrumental role in everything from community events and non-profit organizations to public art and city infrastructure. END_OF_DOCUMENT_TOKEN_TO_BE_REPLACED 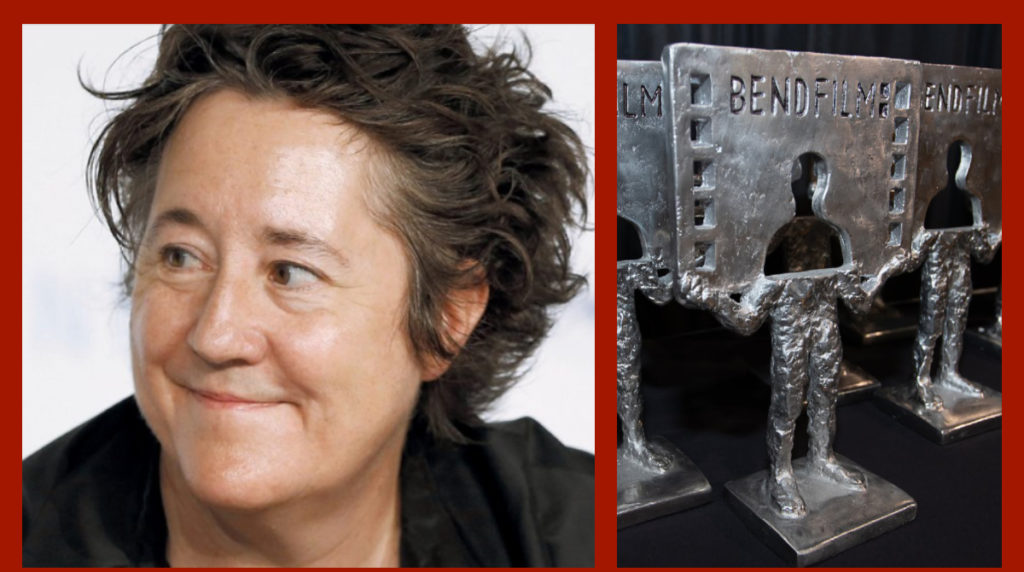 Christine Vachon once said that she remains successful in the film industry because she and her Killer Films co-founder Pamela Koffler are “like cockroaches after a nuclear blast. We do whatever it takes.” And many directors would attest that once Christine sets her sights on a story or director, she gets flat out gets the job done even if it takes twelve years for the right elements to come together. She has been one of the most successful producers in the industry over the last three decades and is showing no signs of stopping.

END_OF_DOCUMENT_TOKEN_TO_BE_REPLACED 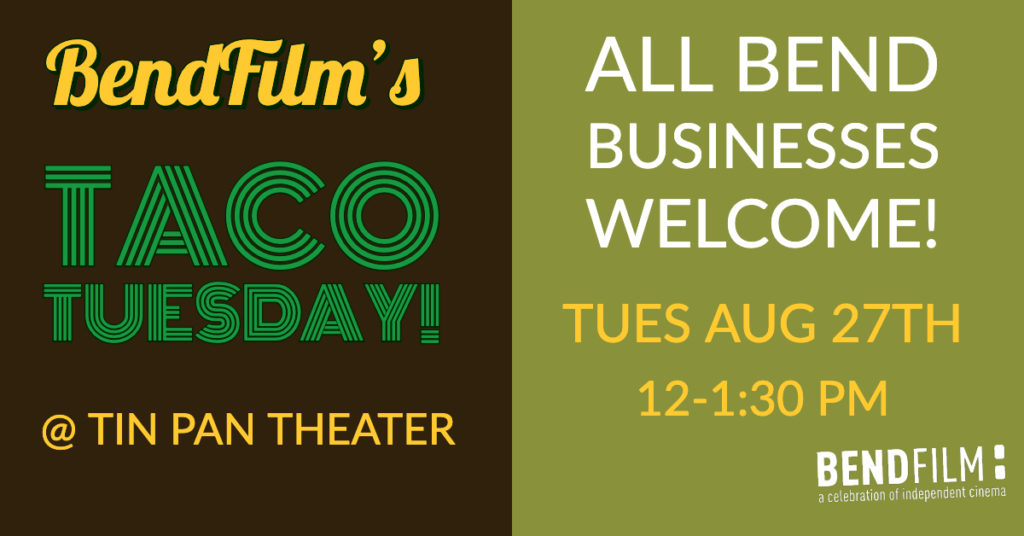 Hello Bend Businesses,
We’re sharing our excitement for all of the wonderful films and guest filmmakers like Ron Shelton (Bull Durham) and Christine Vachon (Carol) to appear at this year’s festival running OCT 10-13.
If you or someone you know owns a business here in Bend, please join us …

Ole’ ole’ come join us for Taco Tuesday! Let’s celebrate the last few days of summer with some delicious tacos and sizzling film previews at the Tin Pan.

Fiesta details: Come venture down to the Tin Pan for a fun lunch break with your colleagues and downtown community. We will be serving up tacos, showing previews and talking about fun Fall events. RSVP to tracy@bendfilm.org but walk-ins are welcome too.

NOTE: In addition to mingling, eating and previews we will talk about ways that your business can benefit from the over $1M our audience will spend at the 16th annual BendFilm Festival. If there is a person at your organization who might be interested in learning about sponsorship opportunities, discount guides and more please forward this email invitation. All employees are truly welcome to come have a good time! Hope to see you soon!

Hedwig and the Angry Inch, and Boys Don’t Cry

Bend, OR – BendFilm announced today plans to celebrate independent film producer Christine Vachon as IndieWoman of the Year during the 16th annual BendFilm Festival. BendFilm will formally recognize Vachon for her tireless work to foster diverse voices in independent film and her bold vision to champion stories that steer outside the mainstream.