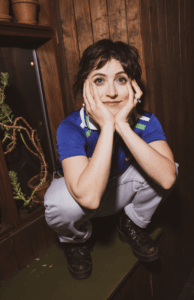 What do you do when Tallie Medel (Becky) from Everything Everywhere All At Once (EEAAO) calls and says they are coming to a screening of their film at our very own Tin Pan Theater? Grab a drink and chat, of course!  We sat down with Tallie at our favorite bar, San Simon (Tin Pan Theater’s neighbor) and asked some of our burning questions:

*Some Questions/Responses have been edited for length and clarity*

Q. So, you are from Alaska correct?

A. Yes! I’m from Ketchikan

Q. Tell us about how you get started in acting?

A. Well I auditioned for Emerson College because our friend’s daughter told me she was checking it out, and at the same time, I had seen The Roast of Denis Leary on Comedy Central and all these people were talking about it and it just sounded cool. It was the first time I had thought about auditioning for an acting school, because I grew up dancing.

So I went to Emerson and that is how I met Dan and Daniel (the directors of EEAAO), my wife, and a bunch of other people who are now my go to collaborators.

Q. This is the 11th week EEAAO has been showing at the Tin Pan Theater which makes it one of our longest played films. We are curious if you could talk about why you think this film has resonated so much with audiences, and continues to be so popular?

A. We were talking about facism at dinner and I really do think this is an important anti-facist film. There’s meme culture too, but this movie feels really appropriate, really timely for a million reasons. One, that it’s about a Chinese American family. But also that just the idea of being kind, especially when you don’t know what’s going on, is so essential. I really think the movie came along at a time we never had predicted would be as important as it is.

Q. Do you have a favorite memory from shooting the film?

A. Everybody was just so happy to be there. But I was talking to Jenny Slate, and Jamie (Lee Curtis) was sitting by us and came over and showed us a Garfunkle and Oats video about (somethings we can’t mention) and sat on my lap so that she and Jenny and I could watch it together. It was great.

Q. Was it filmed during Covid?

A. We barely got it done in time. We actually did not finish. The shot in the cab of the van when Waymond is explaining why he brought the divorce papers to Evelyn, she was in Paris and he was in LA. They had to do that as a split screen.

Q. Do you have a movie or actors that inspired you to get into the industry?

Q. Do you have a favorite movie or one you could watch over and over again?

A. I love Playtime and Akira the anime. And a movie I think about all the time but don’t talk about enough is Monsoon Wedding, it’s so good.

Q. Have you seen any movie recently that you really liked?

Q. Do you have anything in the works or happening right now that you can tell us about?

A. No, I gave up haha. Well, I wrote a movie about Ketchikan. My friend Annalisa Raya-Flores wrote a perfect movie called ‘Farewell Chica’ about two Chicanas who are competing for the same forest ranger position. It goes from being a frenemy thing to like, The Revenant. I’m going to go back to LA to work on a short film with a director named Christian Cerezo ‘Indoor Baseball’ that will then hopefully turn into a feature. And I’ve been teaching Clown classes, I love it!

Q. Tell us more about your Clown, where do you teach them and what do they consist of?

A. Yeah, leading with “Clown” always feels risky. I do them wherever! I taught one out here actually.

A. It was just a lot on how to move, and what I took away from it was it’s the same movements you would normally do, but you exaggerate them, you expand upon them so that it’s natural but bigger than normal.

Tallie Medel (they/them/she/her) is a multidisciplinary artist and award-winning actor in New York City. Medel is one third of Cocoon Central Dance Team. Their short film “Snowy Bing Bongs” is now streaming on Mubi. They lead clown and movement and dance classes, which you can register for here. Recent work includes the role of Becky in A24’s Everything Everywhere All At Once which makes them very happy.