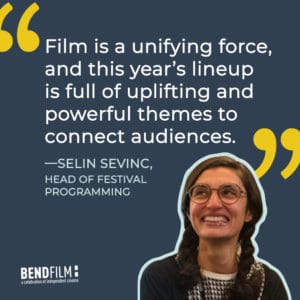 Bend, OR – BendFilm announced today the 21 feature films in competition categories from the 18th annual BendFilm Festival running October 7 – 17, 2021. New this year, BendFilm Festival is now recognized by The Academy of Motion Picture Arts and Sciences® as one of 64 film festivals in the world (27 festivals in the USA) that is Oscar® qualifying for short films. This acknowledgment from The Academy comes after the recent recognition from Movie Maker Magazine that BendFilm is among the Top 25 Coolest Festivals in the World and Top Festivals Worth The Entry Fee.

BendFilm will continue its filmmaker-focused efforts to award over $11,500 in prizes directly to independent filmmakers in these competition categories including $5,000 for Best Of Show. Passes are on sale now for the in-person festival events October 7 – 11 and the streaming events October 11- 17 and the schedule is live. Additional safety measures for in-person screenings will be shared soon.

Todd Looby, Director of BendFilm, said, “We are honored to kick off the festival season with new recognition from The Academy of Motion Picture Arts and Sciences® that our curation is deemed among the most cutting-edge in the industry. I’m also incredibly impressed at the quality of filmmaking represented this year. I know many of these films were made under extraordinary circumstances and to have them be as good as they are is really remarkable. I’m humbled each year by the artists we showcase. Selin and her team had a very tough job and they put together what is potentially our best lineup yet.”

Selin Sevinc, BendFilm Head Programmer, said, “Film is a unifying force and this year’s line up is full of uplifting and powerful themes to connect audiences. From films that showcase youth taking a courageous stand, to political movements with heart, and movies that shine a light on the importance of mental health, there are countless stories that will inspire, delight and get people talking.”

Upcoming BendFilm Festival announcements include Oscar® qualifying short films, Spotlight feature films, the 2021 First Features honoree and (Indie) Woman of the Year honoree.  Submissions are now open for a grant offering $10,000 to a BIPOC filmmaker which will be given out after a live pitch at the Festival.

Ravi and Rita meet on a date arranged by their traditional Indian parents that turns both awkward and enlightening when they find themselves trapped inside together for a week.

A refugee’s plans for a new life in the US are threatened when he finds a dead body in his motel room.

Stranded in an Icelandic village during Earth’s final days, a man seeks solace in the brief human connections he encounters.

Inspired by true events, two best friends, Tariq, an Omani boy and Cai, a privileged Westerner, conspire to steal animals from the zoo and sell them on the black market to raise money for Tariq’s sister’s divorce from an abusive marriage. They are forced to wrestle with morally complex choices that reveal the vast distance between their worlds.

After the death of his mother, Ian must pack up the house where he cared for her in her waning years. A strained relationship between him and his sister leads Ian to discover there are complicated circumstances behind the life he didn’t realize he was living.

​​Isolated in a house on an Italian island, a couple struggles to find the bond that once united them. As they attempt to reconnect with each other, they decide to stage their relationship dynamics in front of the camera as a way to dispel their fears and insecurities.

​​When an Afro-Cuban couple whose dreams are not satisfied in Havana cross paths with an Iranian born Canadian woman, the passionate love triangle that ensues between them gives way to a complex dance of desire and need.

​​Off the coast of Alaska lies a remote island that’s home to the Tsimshian Indians of Alaska’s last native reserve, Metlakatla. For more than a century, two sacred traditions have defined Metlakatla: fishing and basketball. In an improbable journey, two cousins lead their team and town in search of their first state championship in more than thirty years—the only thing that will bring life back to an island that has been rocked by tragedy.

Teenagers run a presidential campaign for a former U.S. Senator in the 2020 election.

Seizing her power as she confronts her mortality, trailblazing trans activist Connie Norman evolves as an irrepressible, challenging, and soulful voice for the AIDS and queer communities of early 90’s Los Angeles.

A motley crew of thrill seeking ski patrollers living the outdoorsman’s dream face a reckoning with mother nature when the Alpine Meadows avalanche of 1982 strikes, leaving eight people missing during a raging storm.

​​Education professionals and reformed helicopter parents offer solutions to combat unprecedented childhood anxiety and depression in today’s world. What can parents, societies and even governments do to restore confidence and joy in childhood?

​​A decade-long portrait of four artists and activists from immigrant families coming of age in an era of rising nationalism.

Motherhood: a subject so deeply ingrained in the fabric of our society we take it for granted as part of the natural order. It’s assumed that all women want children–that motherhood is not only a biological imperative but the defining measure of womanhood. Titled after one of the myths it challenges, this entertaining, inspiring and thought-provoking film draws upon a heady mix of culture, science, and history to reveal the rich lives of a diverse group of people saying no to having children–and the forces that have marginalized them in society.

The untold story of how a network of pharmaceutical manufacturers, distributors, and retailers worked together to orchestrate and perpetuate the opioid crisis that has killed over half a million people in America.

ALMOST AN ISLAND is a cinematic portrait of the Goodwins, an Inupiaq family living above the Arctic Circle in Kotzebue, Alaska. Through observing three generations of one family over the course of four years, ALMOST AN ISLAND explores what it means to be indigenous in the dramatically changing Arctic.

After years of surfing being illegal, a diehard group of Cuban surfers rises up against their government to legitimize their biggest passion. Havana Libré chronicles their fight in the face of political oppression, confronting borders and outdated ideologies along the way.

Witness an eco-activist Rod Coronado’s attempt to end wolf hunting in the United States. Over the course of three years, we watch Rod work to redefine his activism in an era– post 9/11, where some have called him an “eco-terrorist.” The film comes to a climax when Coronado’s “Wolf Patrol” is met with a tightening of “hunter harassment” laws that prohibit photography on public lands.

YOUTH v GOV is the story of America’s youth taking on the world’s most powerful government. Armed with a wealth of evidence, twenty-one courageous leaders file a ground-breaking lawsuit against the U.S. government, asserting it has willfully acted over six decades to create the climate crisis, thus endangering their constitutional rights to life, liberty, and property. If these young people are successful, they will not only make history, they will change the future.

BendFilm hosts an annual independent film festival, year-round film exhibitions and programs, and is the proud owner of the Tin Pan Theater – a boutique arthouse cinema located in downtown Bend’s Tin Pan Alley. The organization is designed to support and nourish filmmakers and enrich the cultural life of Central Oregon while also providing an economic benefit to the region. Celebrating its 18th year, BendFilm is proud to bring diverse voices and visions to the Bend community. The BendFilm Festival runs every October in Bend, Oregon. Make plans to join us October 7-17, 2021 for in-person and virtual cinema plus filmmaker workshops, panels and more. Bend is a mecca for outdoor enthusiasts, foodies, beer lovers and stunning natural scenery. BendFilm is made possible by a dedicated crew of volunteers and generous donors, members and sponsors. For more information, call (541) 388-3378 or visit www.bendfilm.org. Connect with BendFilm on Instagram, Facebook, and Twitter.