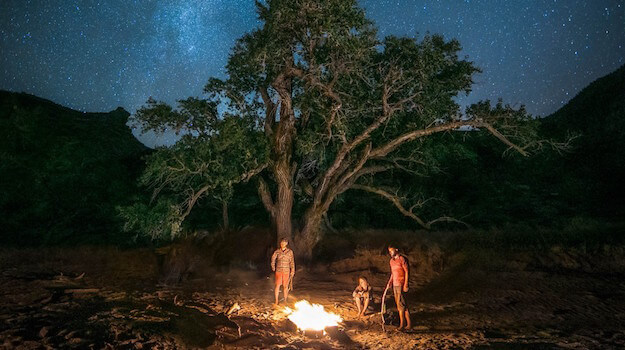 Voyagers Without Trace, the latest feature documentary by McCluskey (Eloquent Nude), tells the story of three French adventurers who, in 1938, were the first to kayak the greatest rivers of the American West. Newlyweds Genevieve and Bernard de Colmont, and their friend Antoine de Seynes, were three dashing young Parisians seeking adventure. The trio traveled from their homes in France, boldly setting out to be the first to kayak the Green and Colorado Rivers.

Director McCluskey appears in the film as he sets off on the dangerous whitewater to search for any remaining traces of this journey. What he finds is more than expected: the original color film documenting their 1938 trip, unseen photos, a diary… and even one of the original kayaks, held in a 16th century fortress in the peaks of the Pyrenees, with an unexpected connection to the French Resistance.

“This new film of adventure and history seems like a perfect fit with the outdoor loving spirit of Bend and I cannot wait to share the film on opening night. It will be a real honor and thrill to pack into the historic Tower Theater for this special showing of the film and a live performance by Jenny Conlee,” said Voyagers Without Trace director, Ian McCluskey who will be in attendance for a Q + A following the opening night screening.

Jenny Conlee of the Decemberists and her husband, Steve Drizos, recorded original music for the film’s score and will be on stage prior to the film to play a short set.

Plan on a fun finish to the evening at the Oxford Hotel’s 10 Below for our Opening Night Reception at 8 p.m. Rest up film lovers, you’re going to want to be ready for a weekend of provocative storytelling.