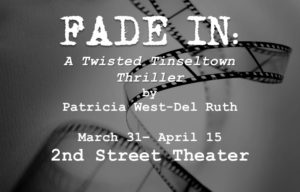 BendFilm, Stage Right Productions, and Creative Heart Productions are proud to offer a preview night of FADE IN: A Twisted Tinseltown Thriller with 100% of proceeds going to benefit BendFilm. The play is an original psychological thriller/black comedy by local playwright, director, and actor Patricia West-Del Ruth, set to debut March 31, 2017 at 2nd Street Theater.  This special event invites patrons to the last dress rehearsal of the play on March 30th, with BendFilm as the recipient of all sales from the evening.

FADE IN proves nothing is what it seems when two estranged sisters—one an LA screenwriter and the other a clinical psychologist— are forced to come to terms with their sibling rivalry, a horrific past, and the love they share over a deranged actor. Playwright West-Del Ruth’s sharp script charts this love triangle’s tenacious efforts to cope with the appalling challenges of their shared history, present, and potential future.

Set in present-day Los Angeles, FADE IN: stars local actors Skye Stafford (Venus in Fur), Catherine Christie (5 Lesbians Eating a Quiche) and Robert Marquez (The Pillowman).  This original, spellbinding work according to Stafford is “reminiscent of a Twilight Zone episode with the edginess of a Tarantino film.”

“One of BendFilm’s main goals is to partner with local film professionals, indie theaters, and other artists, like playwrights, to help empower people through art,” said BendFilm Director Todd Looby. “When local artists come together to support one another, we strengthen our community. BendFilm is very grateful to 2nd Street Theater and Playwright Patricia Del Ruth for sharing the proceeds from this preview production of FADE IN, and we encourage all of our supporters to come out and enjoy this event.”

What: A play dress rehearsal / pre-view to benefit BendFilm