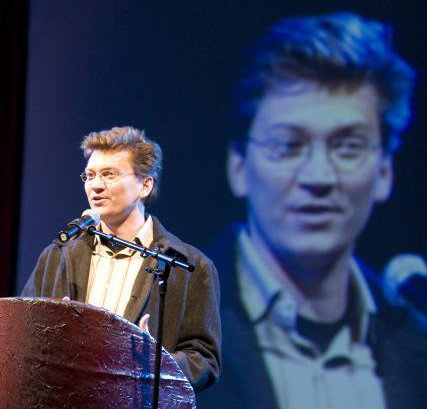 It’s no secret that being a film festival programmer is a dream job. That fact is not lost on Erik Jambor who loves watching movies, discovering new filmmakers, discussing program themes with the community and curating festival films for indie film fans. Erik also has the incredibly challenging task of working with a committee of dedicated film lovers to narrow the more than one thousand annual submissions into a weekend film slate for the BendFilm Festival. But he truly loves it.

In fact, if you need help figuring out which films should be on your personal schedule, just drop him a line or stop by the BendFilm office with a spare cup of coffee. He’s always happy to help folks find their way through the festival schedule.

Luckily, Erik took a break from his never-ending to-do list to answer a few questions about programming a festival, his favorite films and his must-have snack during a movie:

Q. How would you describe the role of film in your life?

I’ve been programming festivals since co-founding Birmingham, Alabama’s Sidewalk Film Festival back in 1999, so by now film is like is an opposable thumb. Film makes it much easier to get through life.

Q. What is your favorite snack to eat while watching a film?

Soft pretzels. The yellow mustard is always a mess in the dark, but you gotta have it.

Q. How do you screen films? (ie at home on the couch, at your computer with headphones, both?)

I have a four-year-old, so however I can!

Q. What movie would you take with you to a deserted island and why?

Don Hertzfeldt’s Billy’s Balloon. It’s a 6 minute short from 1998 that pretty sums up how I’d feel in that situation. I’m pretty sure I’d need a friendly-looking balloon to punch me in the face over and over again…

Q. What is the best part and toughest part about being a programmer?

Lots of free movies to watch! And it’s a rush to be able to notify filmmakers that they’ve made the cut. But on the flip side, it’s  impossible to run all my favorites, and I’ve had to build up calluses on my heart to be able to give them the sad news — and send out the other 1,000+ rejection notifications we dole out each year. I’m sure my karma takes a serious hit with each one.

Q. What trends are you seeing in the submissions this year?

It’s a big year for films about Uber-like ride sharing services. It also seems like social media pays a major role in more than a few.

Q.  What are you looking for in the submissions and how do you create a well rounded program?

I love to find films that are a visceral punch in the gut — where you’re taken for a ride that ends up being different from what you expected. Of course, some films are more subtle, and ultimately we want a program that offers a wide range of emotions and experiences. Overall, the goal is to run a broad range of films that appeal to lots of different types of people. Hopefully, within the program somewhere, you’ll find your next favorite film.

Q. Do you have a favorite BendFilm Festival memory you can share?

That’s gotta go back to 2007. The festival awards show was on-stage at the Les Schwab Amphitheatre that year. It’s a bit risky to hold outdoor events in Bend in October, and winter came early that year. The on-stage presenters had to deliver awards through chattering teeth, and the ice sculpture table settings refused to melt, just reminding everyone how cold it was.