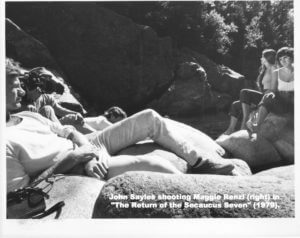 For the “First Features” inaugural year, John and Maggie will present THE RETURN OF THE SECAUCUS SEVEN (1979), John’s directorial debut and the beginning of their collaboration. John wrote and edited the film, and Maggie is featured in a starring role and served as the film’s Unit Production Manager, Location Manager, and Assistant Editor.

After the screening, Maggie and John will participate in an onstage conversation about the film’s production, their almost 40-year collaboration, and how independent filmmaking has changed from 1979 to today. John will also moderate the festival’s “First Features” panel, leading a conversation with several narrative feature filmmakers also screening their first feature at this year’s festival.

Renowned independent filmmakers will join us each year for the BendFilm Festival to screen their first feature film and discuss how they were able to capitalize on that film’s success to establish their subsequent careers.

The BendFilm Festival strives to discover new filmmaking talent. We program several feature films each year by first-time filmmakers who display mature and original filmmaking technique and ability. These filmmakers are navigating a very crowded field of new and experienced filmmakers. They now have a much harder time establishing filmmaking careers in comparison to the celebrated independent filmmakers who came to prominence before the digital age.

More about Maggie and John

In addition to her work with Sayles, Renzi also produced Karyn Kusama’s GIRLFIGHT and is Executive Producer with Sayles on Alejandro Springall’s movie MORIRSE ESTA EN HEBREU / MY MEXICAN SHIVAH.  Renzi and Sayles also produced and directed three music videos for Bruce Springsteen: BORN IN THE USA, I’M ON FIRE, and GLORY DAYS.

Twice nominated for an Academy Award for Best Original Screenplay, Sayles remains a sought after screenwriter, most recently working on the writing team for the TNT event series THE ALIENIST. Sayles has been honored by the National Association for the Advancement of Colored People (NAACP), Writers Guild of America (WGA), Modern Language Association (MLA), American Studies Association (ASA), and American Historical Association (AHA) for his authentic depiction of history and community.