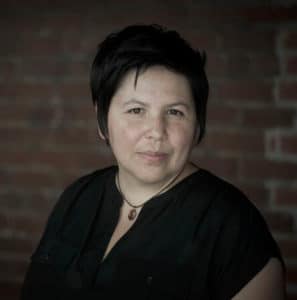 Dawn Jones Redstone (she/her) is an award-winning queer, Mexican American writer/director whose short films have screened around the globe including the acclaimed Sista in the Brotherhood. Her work often features women of color (cast and crew) and explores themes of resistance, feminism and the internal machinations that help us transform into the people we want to become. She believes in using her hiring decisions to lift people up and help create an inclusive filmmaking community that reflects and brings needed perspective to the world we live in.

In honor of Women’s History Month, we interviewed Dawn to talk about her upcoming feature film and and experience as a female filmmaker:

Q. How did you get started in filmmaking?

A. I grew up with movies so when I had my chance to buy a camera, I did. It was only after doing so that I began to see how I could invite others to see what I see through use of its lens. What an intoxicating idea–especially if you have something to say. I took my first film class at what used to be the NW Film Center here in Portland and immediately got into my first festival. I was hooked.

Q. What do you enjoy most about being a filmmaker in Portland? Anything you would change?

A. I enjoy being amongst a community of artists after taking some time to find “my people.” While it might be a terribly dark time to be in the world right now, being amongst people who care and are processing it all through art is consoling. I do continuously want to see more women and people of color in the narrative film directing space! Part of that is having more spaces for us to connect and support each other as well.

Q. What has your experience of being a queer, POC filmmaker been like?

A. I seek out more people like me and be supportive to others coming up behind me. That’s one reason why I often make a point of announcing my identities because it may not be obvious that I am queer and Latinx. It’s my way of being visible and saying, “I’m here. We deserve to be here. It’s possible!”

Q. How do you use your experience to uplift other people within the filmmaking community?

A. First and foremost, I hire women and people of color. In my feature, Mother of Color, we posted the data on our website (motherofcolorfilm.com) of who we hired and it was mostly women of color. In a lot of instances, this meant hiring people who were stepping into a larger role for the first time. This is really the key. We know that as the saying goes, “Like hires like,” which means that because the industry is predominantly made up of white men, they predominantly hire other white men. I do the same thing, but when I do it, I’m correcting this historical exclusion. And I have to think outside the box a bit to do that.

But outside of this, I also am in contact with other up and coming filmmakers who have reached out to me and I also try to show where I came from and how I got here. Showing the winding and unwieldy path to others embarking on it, is key.

Q. What are the most important messages you hope your audience receives when viewing your work?

A. Every film has its own messages, but there are clear threads running through my work around resistance, emotionality, self-care/healing and righteousness.

Q. If you could use one word that describes the kind of films you make, what would it be?

A. That’s tough to answer. My films have tended to be dramas with moments of humor and tenderness, but I’ve also made some comedies and am currently writing one.  I guess the thing they all have in common is women of color, striving for something better and whether they succeed the way they envisioned or somehow differently, there is hope.

Q. You are currently working on your first feature film, Mother of Color, can you tell us more about that?

A. It’s about a single mom who begins hearing messages from her ancestors as she sets out to try to get to a life changing job interview with a local commissioner. It stars Ana del Rocío, Patricia Alvitez, and two incredible kids Kasey Tinoco and Julian Hernandez. Portland  City Commissioner Jo Ann Hardesty and Luz Elena Mendoza (of the band Y La Bamba) are in it, too!

Q. What do you hope for future female, queer and POC filmmakers?

A. I hope that the world continues to make way for our voices and that we ourselves, maintain belief in ourselves when others might not so that our voices, too, can be heard.

Q. What is your favorite film you have seen recently?

A. I recently watched The Fallout. Loved it.

Q. Do you have a favorite film of all time? What is it?

A. My brain doesn’t work in absolutes, but random faves that popped into my head: A Fantastic Woman, Pariah, Portrait of a Lady on Fire, Contact, The Rider, The Forty Year Old Version, Mosquita y Mari.