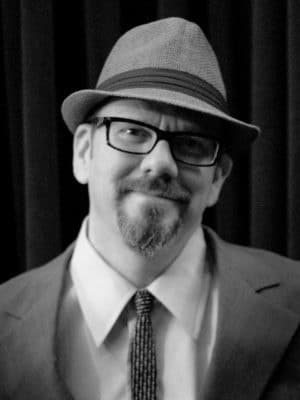 Rex Carter is a filmmaker and visual effects expert based in Portland, Oregon. After having multiple shorts of his own selected for the festival, Carter joined the BendFilm team as an Associate Programmer for Narrative Shorts in 2019. We spoke with Carter about what the programming team’s work, the upcoming festival, and his advice for up-and-coming filmmakers.

Responses have been edited for length and clarity.

Q: You’re a shorts programmer for the festival. Can you tell us a little bit about what that means?

A: It started with me being on the screening committee. The previous programmer, Erik, noticed that I watched a ton of movies. He asked, and I said “sure!” I just love watching all the short films. I pound through them. I’m watching like 500 of them each year as part of the screening committee. It’s just so interesting to see how many different directions people can go with something that’s between 2 and 20 minutes long. There are just so many possibilities.

Q: What do the best shorts have in common, knowing that there is such a range of possibilities?

A: It’s no different than a feature in which you want to get to a place of emotion or something that touches or impacts you in some way. The hard part about shorts is that you don’t have a lot of time to get there. You’re spending such a short amount of time with the characters that you have to create everything economically and quickly. The best shorts find a way to establish their premise, get you into the characters, and then provide you with the narrative arc all within an abbreviated timespan.

Q: You’ve been a programmer for 3 years, 2019-2021. What’s changed this year with regard to COVID and changes within our cultural landscape?

A: I knew going into this year that we’d probably have a lot of COVID-themed films, just because when you get a whole bunch of creative people out there in the world that are all of a sudden looking for something to do, and they have to stay inside, I knew that many would do ‘I’m stuck in my apartment’ COVID films. I wanted to set a really high bar there, and only choose the best one or two of those. I knew we would have too many to choose from. I also thought, coming out of this—and unfortunately we’re not yet out of it—that an audience might not have an appetite for COVID themes; they would want an escape from these last two years. We did get a lot of COVID-themed submissions. Unfortunately, like I said, a lot of them get washed out. I set my bar really high on those. You had to be really, really good.

But the other thing I noticed was how much filmmakers were still getting done. There were still some films that felt like nothing had changed. I don’t know if they just got their friends together and took longer to do it, but they were still cranking out high-quality short films this year. I was impressed with that.

Q: So two things to be excited about: high-quality films about COVID, and a lot of non-COVID related work.

A: Yeah. I really try to put myself as the viewer in a block of short films and think, ‘What would I enjoy sitting through with an audience for 90 minutes?’ I’m a big fan of comedies, because usually when I go to film festivals, comedy is one of the lesser-submitted genres, compared to say, drama or experimental. I try to find room for comedies, because when you’re in a block of films, you need to find that balance to counteract all of those dramas. You can’t just have 90 minutes of depressing stuff. So I’m always on the lookout for more comedies. But it’s a fine line, because peoples’ sense of humors can be so far apart: there are silly comedies, there are more meaningful comedies…I think what’s nice about Bend is that there’s room for both. We have the nice late-night block, Midnight Shorts. If someone’s humor is darker or more bizarre, we can find a place for it there.

Q: What are you most looking forward to about this year’s festival?

A: Well the thing I look forward to the most actually is something that can’t happen in Covid times: there’s always opportunities for meet and greets with other filmmakers. There’s opportunities to bump into your fellow filmmakers, fellow staff from the festival, to talk about films and exchange phone numbers. You put everybody in the room together, put a drink in them, and get people talking. It’s the part that I enjoy the most about going to festivals.

Q: And you aren’t just a filmmaker, you’re also a visual effects expert. What came first for you, filmmaking or VFX?

A: It all happened at the same time. I’m old enough that I was a young kid when the very first Star Wars came out. I was 8 years old. When I got into high school, I started to see behind-the-scenes kind of things for special effects movies. I realized, these people are building little spaceships and putting them against blue screens and photographing them. I was seeing how these things were achieved and I was like ‘You can do that? And make a living? This can be somebody’s job? That sounds cool!’ And then, coincidentally, I was in the first generation of students to have computers in the classrooms. Our school district invested in these Apple computers, before computers even had mouses or anything like that. They were teaching computer programming in my advanced math class. So I was the very first generation of computer students when I was in junior high. I had this love of movies and spaceships flying around on blue screens, and then I had this love of these new computers that were in the classroom. And it was serendipity that those two things eventually combined. When the computer world and the filmmaking world came together in the late 80s, early 90s, I was right there.

Q: I’m curious how your expertise as a visual effects designer informs your perspective on shorts programming, and the selection process.

A: I actually have a weird backlash against special effects. It’s weird. I don’t like superhero movies. I don’t like comic book movies. I hardly ever watch them. I don’t actually care for all the fancy spinning cameras and visual effects. I’d much rather the filmmaker just leave the camera alone and shoot a great actor with a great script and a simple camera. I don’t need special effects in my movies. It’s sort of weird that what I do for a living is not what I want to see in a film.

Q: I imagine, like we talked about earlier with COVID-related films, your standard would be much higher.

A: There are still special effects movies that still grab me and wow me, but unfortunately, too many of them just don’t. I know just recently, there’s that Jungle Cruise movie with The Rock and Emily Blunt. I looked at it, and I thought ‘That’s a CGI snake. I don’t believe that one bit.’  I’m not drawn into it. I would much rather have a great script and good actors. I do like lighting, I like good lighting. But I don’t need the camera to be flying around all the time.It goes back to good writing. I love a well written screenplay the most, and unfortunately, I feel like that’s the talent that gets overlooked the most in filmmaking. Even on a short film level. When I’m reviewing, the first thing I’ll criticize is when the dialogue is just too on the nose, when people are speaking their inner monologue out loud. Good writing is peeling the onion of the character.

Q: What advice would you give to an aspiring filmmaker looking to follow your line of work? Or, more accurately, your multiple lines of work?

A: When I was growing up, there were price barriers to film. Film was expensive. The price barriers are hardly there anymore. If you want to make a film, just go out and do it! If you’re just starting out, find an idea that’s short, sweet, and simple; that you can shoot in a few days with minimal characters. Get your toe wet and get into it. I think too many people try to think big and get bogged down in the logistics. Filmmaking is just logistics. It’s like, ‘I need to get this many people gathered on this day in this location with craft services coming at this time, and I’ve got to feed people lunch….’ The more things you add to that, the harder it gets, quickly. That’s why there’s usually a producer and director—because you don’t want the director to get bogged down by the logistics. I happen to do both.

Q: Do you have a preference for being on one side or the other?

A: Oh, absolutely—I hate the logistics! I’d rather just be free to be creative and let somebody else figure out everything. But unfortunately, if I want to get it done I’ve got to do it myself. The biggest thing I ever did had, I think, 12 people involved, and I thought, ‘if one person out of 12 doesn’t show up, I’m screwed!’ So if you want to start, keep something short and sweet. And focus on the writing.