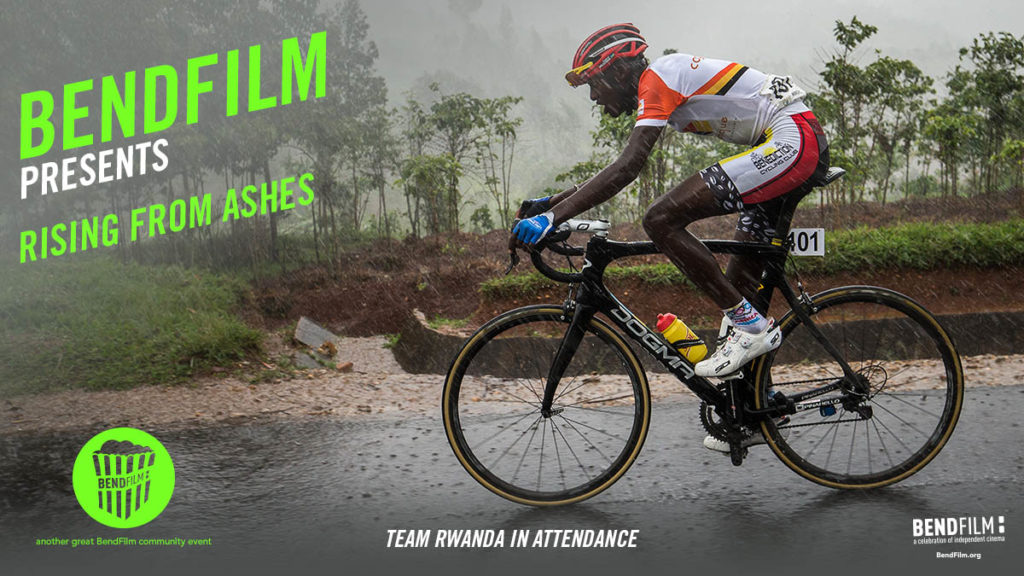 Rising From Ashes: Bikers in Attendance!

BendFilm will present two screenings (at 5:30 pm and 8:15 pm) of RISING FROM ASHES, the uplifting and redemptive 2012 documentary by T.C. Johnstone that follows Team Rwanda in its quest to reach the highest levels of cycling while becoming a symbol of hope for their recovering country. “It’s not just about a cycling team,” wrote Daphne Howard in a review for The Village Voice. RISING FROM ASHES “is a testament to what happens when human beings care for one another.”

Team Rwanda is making only its second trip to the United States to race in the 37th Cascades Cycling Classic–July 20-24. Six riders will be at the screenings, including Gasore Hategeka, who is featured in the film, and team captain Bonaventure Uwizeyimana. Also coming are team head coach Sterling Magnell, team director of marketing and logistics Kimberly Coats, and Team Africa Rising founder Jock Boyer.

Proceeds from the McMenamin’s screenings will go toward Team Rwanda’s efforts, not just in developing more Olympic cyclists, but also to its expanded mission to improve literacy, food, water and healthcare in Rwanda.

“When you say Rwanda,” Coats told an interviewer last year, “people still think genocide.” Of Hutus and Tutsis and the mass slaughter of an estimated 500,000-1,000,000 men, women, and children. “Our riders…always say that they want Rwanda to be known as a land of cycling, and not for all the bad of the past. They see themselves as ambassadors of a new Rwanda and proof that people from different backgrounds can come together and race as one team.”